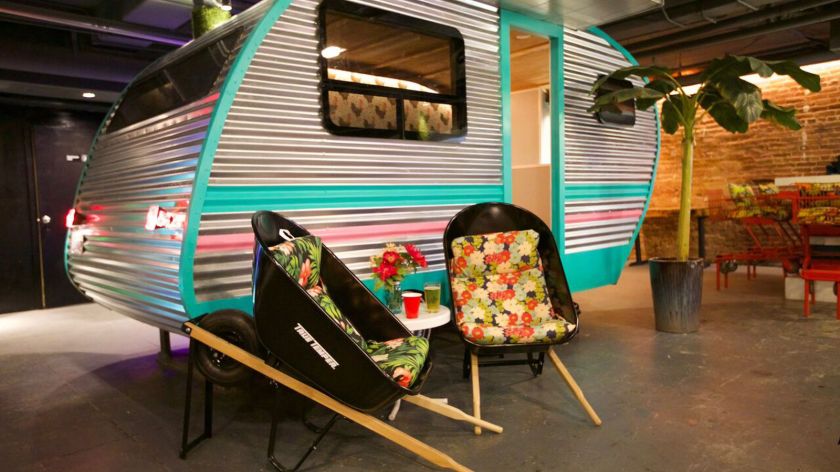 09.26.18
Dream: In an enthralling pursuit, I was being chased by a dark shadow that terrified me. As long as the street lamps were on, the dark shadow could continue following me. I was running as fast as I could in a disorganized trailer park that was hardly resplendent. It looked run-down and almost dilapidated. Yet, it felt familiar as my feet knew exactly where to go. There were a series of trailers that had their side doors open. I would jump into each of these, apologize to the person who owned it, and kept running.

In one of the trailers, I recognized the guy. His dirty blonde hair draped over his pale-complected face. He wore a gray shirt, a pair of khaki shorts, and some brown flip-flops. I was temporarily shocked that I encountered this young man, the one I had meaningful philosophical discussions with in college. “I gotta go!” I screamed back at him as I kept running.

I eventually reached a grassy field that was lit up by stadium lights. There was a soccer match in the field. I noticed a barbed wire fence surrounding the edges of the playing field. I was worried that I was going to hurt myself by trying to climb it, but I was more worried about the dark shadow catching me. So, my hands latched onto the fence as I climbed and hoisted myself over the fence. The barbed wire slashed my chest covering my heart. My roommates were waiting for me there and they tried to protect me, but eventually I got caught by the dark shadow.

Suddenly, it was like I went back in time, and stuck in a time loop. I was running yet again, and I was aware of the fact that I already ran this trail. I decided to change my decisions. By the time, I reached to the trailer with the blonde hair man, I stopped and rested to the front of the trailer. I leaned into the bean bag trying to catch my breath.

I saw a rectangular tin box on the floor of the trailer, and decided to open it. I saw a black and white photo of a young girl her hair cropped short. She had a dainty smile as she mischievously stared back at the camera taking her photo. I asked him, “Is this why you talked to me in college all those years ago? Did I remind you of her?”

I woke up feeling a mixture of nostalgia and restlessness. This dream is a very complex one involving a lot of events in my life. Sometimes, I think we don’t always have closure on some things. However, I was thankful for this post I read on the Godly Chic Diaries this morning about “The Greatest Act of Grace”. She spoke to my heart today. I remembered when talking to this young man that my speech and my actions confused him. He would criticize me for things that he did not understand about me.

“Or maybe it’s them…Maybe they cannot love you because you somehow make them less than. They feel threatened or intimidated by you. The possible reasons are endless and no matter how much love you radiate into the world and into those around you, there will always be those who cannot see it or refuse to see it.”

So with that in mind, if he was here I would say, “Hey David, I forgive you. Because of you, I got to explore some of the greatest thinkers, theologians, and philosophers in history that has penetrated my life. Because of you, I made new rewarding friendships and relationships that I never saw coming. So…. thank you.”

Hello everyone! I'm a technical writer by day, creative writer by night. I have a wild imagination yearning for more in life. I'm fascinated by many subjects that have developed into a sort of mental and physical wanderlust that ultimately leads me to experience a variety of cultural shocks. Welcome to my journey and looking forward to reading your blogs! View All Posts

This site uses Akismet to reduce spam. Learn how your comment data is processed.